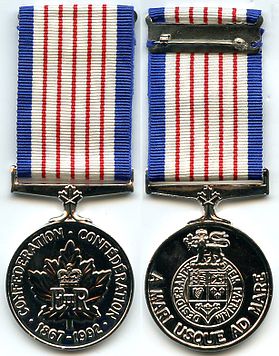 William A. O’Shea’s wonderful legacy continues to surprise us. Just this week I (his son Kevin O’Shea) learned that in 1992, my father was awarded the 125th Anniversary of the Confederation of Canada Medal which was awarded to Canadians who were deemed to have made a significant contribution to their fellow citizens, to their community, or to Canada.

Helen O’Shea, wife of William, found the certificate just this week and is still searching for the medal.

Here is a little more information about the medal from Wikipedia:

“The 125th Anniversary of the Confederation of Canada Medal (French: Médaille commémorative du 125e anniversaire de la Confédération du Canada) is a commemorative medal struck by the Royal Canadian Mint to commemorate the 125th anniversary of the Confederation of Canada and was awarded to Canadians who were deemed to have made a significant contribution to their fellow citizens, to their community, or to Canada. Nominations were submitted to lieutenant governors and territorial commissioners, senators, members of parliament, provincial governments, the Public Service Commission of Canada, the Canadian Forces, the Royal Canadian Mounted Police,[2] and various federal government departments, as well as organizations throughout the country, and some 42,000 medals were awarded.”

My father was passionate about preserving and documenting the history of Canada and that of the Town of Louisbourg on Cape Breton Island.

The fact that I did not know he was awarded this medal also demonstrates his humbleness.

We appreciated him every day he was with us, but it’s warming to see Canada did as well.

This site is dedicated to the memory of William A. O’Shea:

William A. O’Shea was a researcher, historian, and manager for Parks Canada / Heritage Canada. His professional life was dedicated to learning more about and teaching Canada about the history of our country. One of his personal passions has always been to learn more about local histories and share them with the broader community. He was a founding member of the Louisbourg Heritage Society, Deputy Mayor of the Town of Louisbourg (Nova Scotia) and wrote many books and articles about the town of Louisbourg and the surrounding area. He called Louisbourg home for more than 30 years. Until his passing on October 14th, 2019, he resided in Cornwall, Ontario near his home town of Long Sault, Ontario.

This site is maintained and updated by Kevin O’Shea (O’Shea Archives founder).